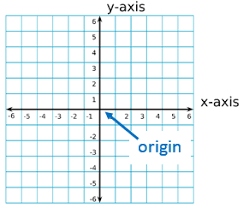 Most students learn about Co-ordinate geometry in Grade 7 or Grade 8 and this is how we usually introduce this topic to them:

We draw two perpendicular lines on the graph, name the intersection point as ‘origin’ and introduce x & y coordinates to represent any point on the plane. Then, we tell them the formulae needed to solve various problems.

I feel that this introduction does not leave any scope for curiosity. I want my students to be amazed by the beauty of Math. I want them to be curious about this subject.

My job is not just to ‘teach’, my job is to create the desire for learning .

I introduce this beautiful concept to my students in this way:

Me : Have you ever followed a fly ?

(That’s the first question I ask my students) 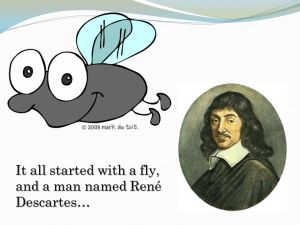 Me : That’s how, René Descartes discovered Coordinate systems. Lets try to dig into the history and find the traces of this wonderful discovery.

Me: There are many stories on web*, this short story might give you a glimpse of how such important concept was discovered in history.

René Descartes was a French man who lived in the 1600s. When he was a child, he was often sick, so the teachers at his boarding school let him stay in bed until noon. He went on staying in bed until noon for almost all his life. While in bed, Descartes thought about math and philosophy.

One day, Descartes noticed a fly crawling around on the ceiling. He watched the fly for a long time. He wanted to know how to tell someone else where the fly was. Finally he realised that he could describe the position of the fly by its distance from the walls of the room. When he got out of bed, Descartes wrote down what he had discovered. Then he tried describing the positions of points, the same way he described the position of the fly. Descartes had invented the coordinate plane! In fact, the coordinate plane is sometimes called the Cartesian plane, in his honor.

Me: If you prefer watching videos to reading text, here you go. The story in this video does not exactly match with the short story mentioned above but the crux is the same.

Who is the founder of this branch of Mathematics?

Rene Descartes (Pronounced “day CART”), a French mathematician and philosopher invented this branch of mathematics – Coordinate Geometry. He is also famous for the quote ‘Cogito ergo sum’ (I think, therefore I am)

What was the thought process behind this beautiful discovery?

Every curve/line is nothing but a collection of points. He proposed that curves and lines could be described by equations using this technique, thus being the first to link algebra and geometry.

What is the importance of this discovery?

It provides a connection between algebra and geometry through graphs of lines and curves. Until Rene Descartes invented Co-ordinate Geometry, these two branches (Algebra & Geometry) were like 2 isolated islands. This discovery enabled geometric problems to be solved algebraically and provided geometric insights into algebra.

Where do you see it around you?

You see Co-ordinate geometry in action when you:

2 thoughts on “Have you ever followed a Fly?”